Replacing the head gasket, step by step. Part I: The Air Inlet.

This is our story about overhauling a 22R petrol engine of a LandCruiser LJ70.

Warning
Please note:
1. We are not professionals, we're amateur mechanics. This is our first time doing this, so there may be some mistakes in the description that follows.
2. It's extremely useful to have a shop manual for this type of engine.

Why?
The exhaust of the LandCruiser RJ70LV we purchased blows out large clouds of white fumes. If you put your hand in the fumes at some distance, it'll be wet and smell like coolant.
After reading through lots of forums, it seems there are two options: either the head gasket is broken, or - even worse - a broken head.

We decided to fix this ourselves, and this is our accompanying report. It is a step by step photo report.

For whom?
We only have limited experience in tinkering with cars. This report would be well suited for a recently started amateur.
On the other hand: I'm doing this with my son who is a second year Automotive student at an Institute of Technology, so that helps.
The photos are step by step. Too detailed? Feel free to skip ahead.

Which engine?
The engine we're working on is a 2.4 liter Toyota LandCruiser gasoline engine. A straightforward 4 cylinder in line. The engine is a type 22R.
This report seems suitable for all 4 cylinder line engines, but with a side note that all photos are of a 22R engine.

What do you need?
Because of my occupational disability (I am a Project Manager), the first thing I want to know is: what do I want to achieve?
In this case that would be: how do I get from…
A: a defective engine with clouds of white exhaust fumes,
to
B: me behind the wheel with a smile on my face and a street behind me that isn't white from all the fumes.

First we'll need the correct information (yup, I'm Project Manager in Automation).
We found this in two books. You can see them both in a previous part of this blog.
The “Toyota 21R, 22R Engine repair manual” from 1987 has the most information.

The steps
We'll need to execute the following steps  to get to the cylinder head (source: the Toyota 21R, 22R Engine repair manual).
This is just an outline. We'll use photos  to illustrate what we're doing later on.
1.      preparation
2.      remove everything above the engine, i.e. the air filter;
3.      remove dipstick, distributor and spark plugs;
4.      remove valve cover;
5.      remove fuel pump and related connecting tube;
6.      remove water hose from intake manifold;
7.      set cylinder no. 1 at top dead center, which is done by placing a mark
on  the crankshaft;
8.      put a marking on the timing belt so it can be put back into the exact
same position later on.
Also remove sprocket which runs over the timing belt.
9.      remove cylinder head itself. The bolts need to be removed in a certain
order.

Preparatory work:removing the air filter
We could write down exactly what we did, but pictures say a whole lot more, I think.
Hence the following step by step photo report. A lot of the pictures are a little grainy, which is not so nice, but there was very little light. The flash option gave shadows.

The place where it's all going to happen: 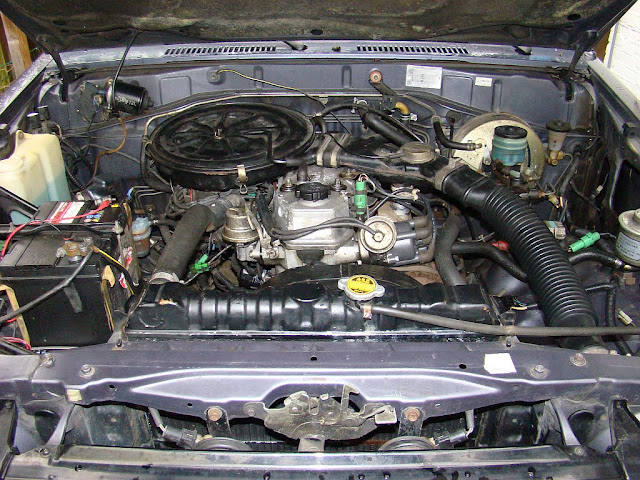 The bonnet is in the way, but we can remove that by unscrewing the four bolts. We'll do that :-)
On the left side you'll see the sticker with the Landcruiser type on it: RJ70 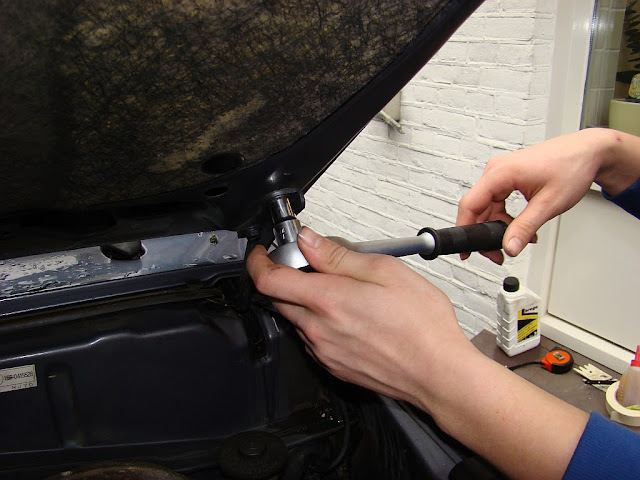 Not a lot of space for the parts, but it's usable. 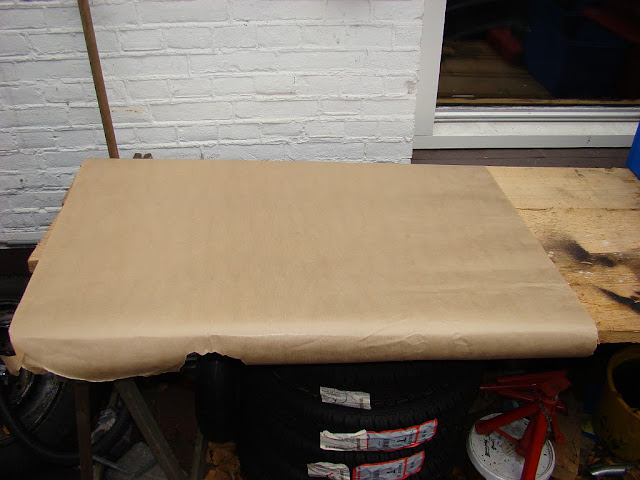 May come in handy later, hence the picture.
"Vacuum hose information".  A schematic of how the vacuum hoses are connected. No idea what it's for yet, but we'll see. 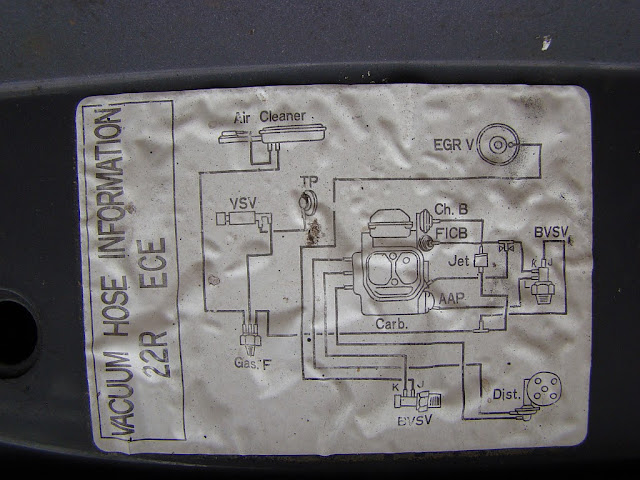 No bonnet. That creates space. And light! 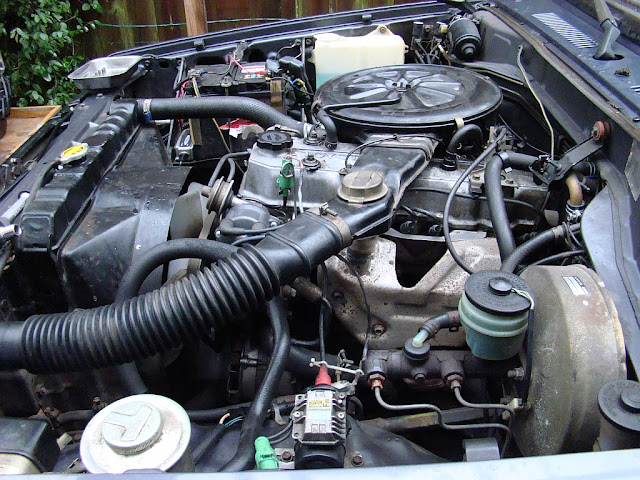 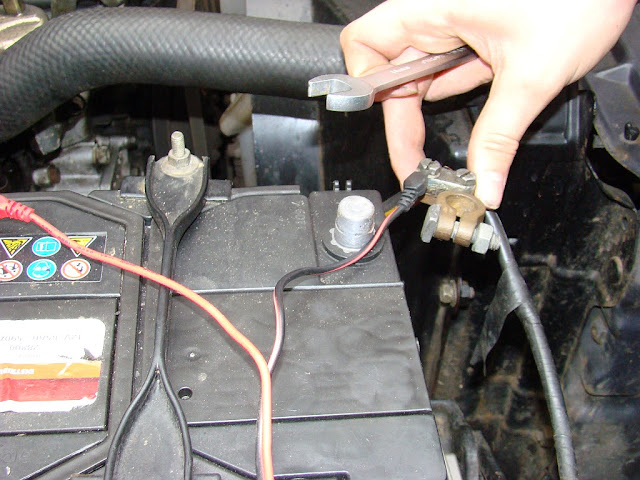 And disconnect the positive pole. The red wire leads to... 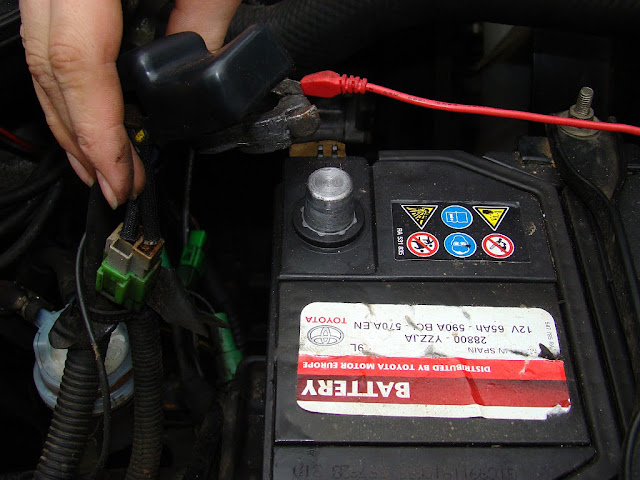 ...a battery charger. This LandCruiser is from Sweden where it's useful to always have a fully charged battery at low temperatures. 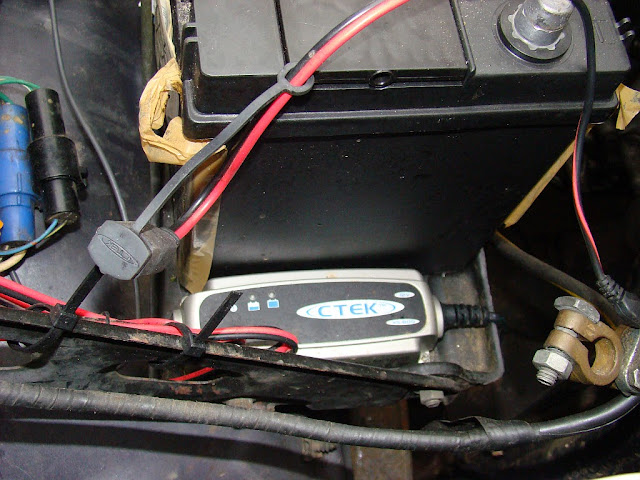 Time for the manual. 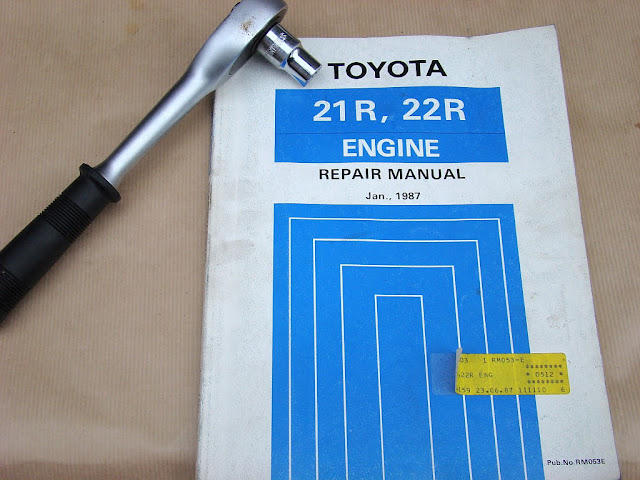 Which includes: "how to remove a cylinder head". 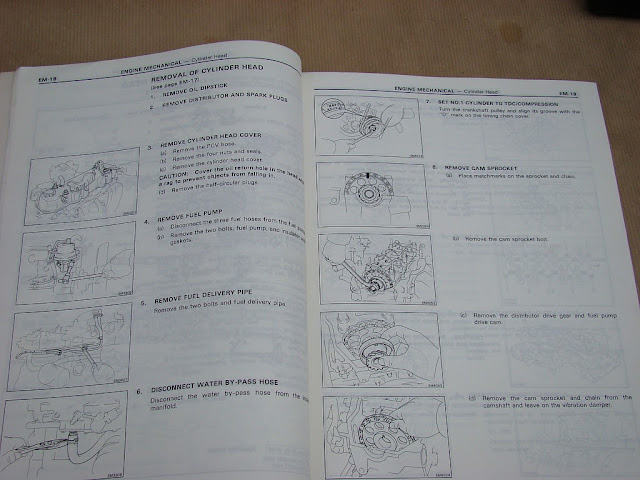 Detach the end of the air filter. 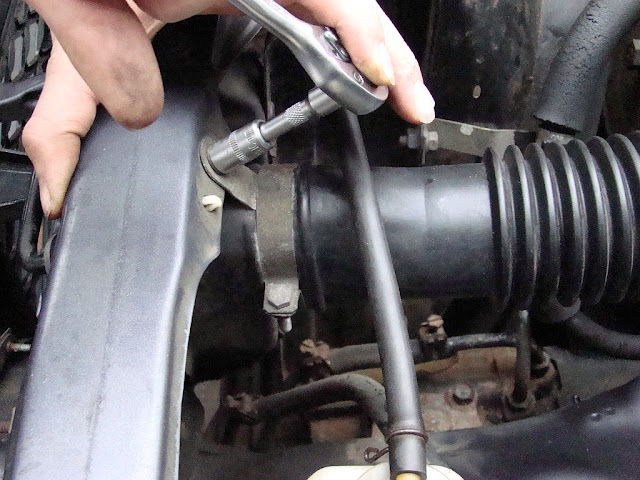 You can store the loosened bolts separately of course. We leave them in the right place whenever possible. Saves us from search work later on. 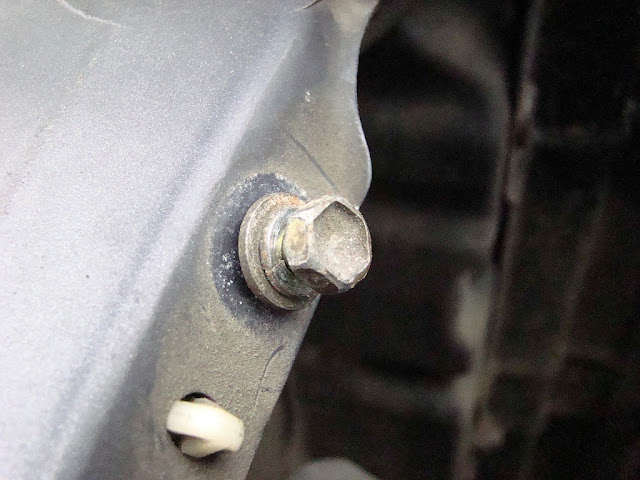 Next step: disconnect the connector from the air filter. 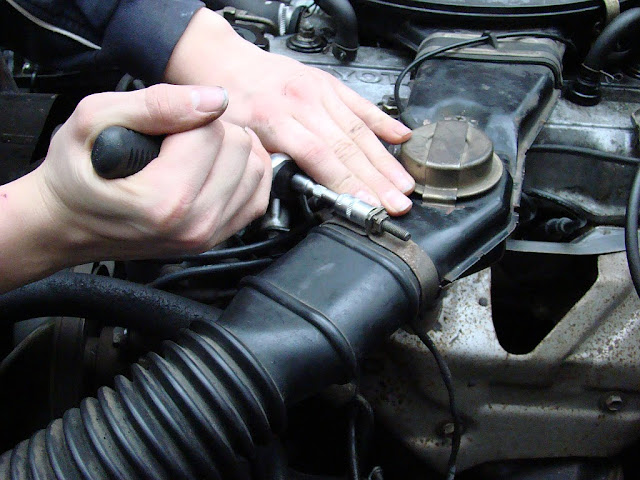 We found this on the under side of the air box's filter (the large round biscuit tin).
This is part of the EGR (Exhaust Gas Recirculation). T. - the Automative student - knew exactly what it was (and so did Wikipedia, read this).
My conclusion: not good, replacement necessary. 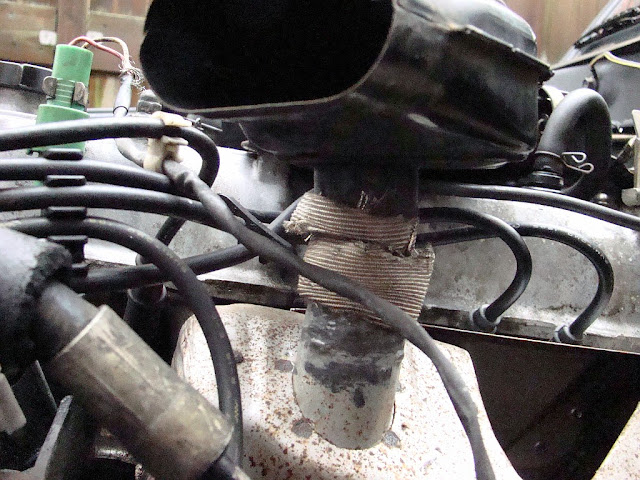 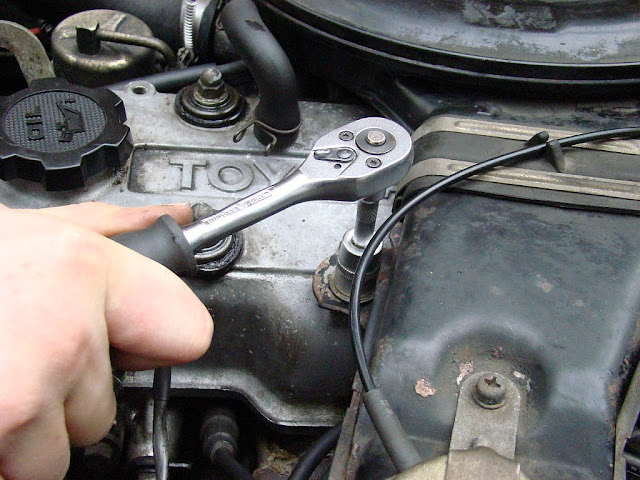 Pull the tubing at the top. 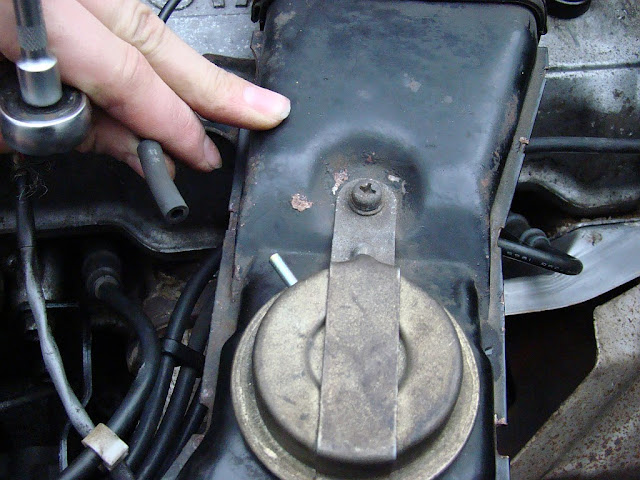 Loosen the tube at the top of the air drum - engine. 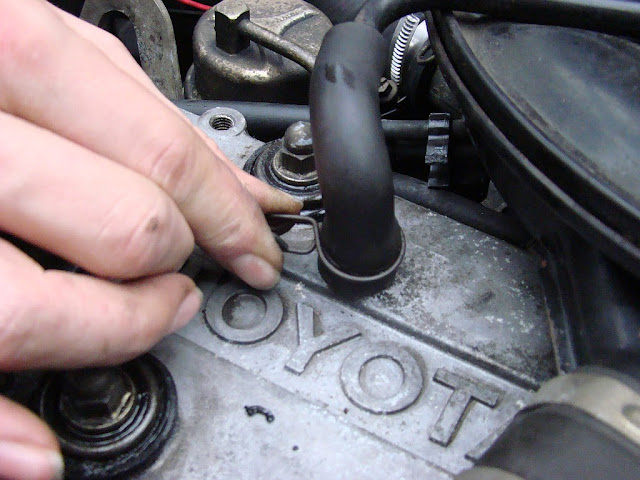 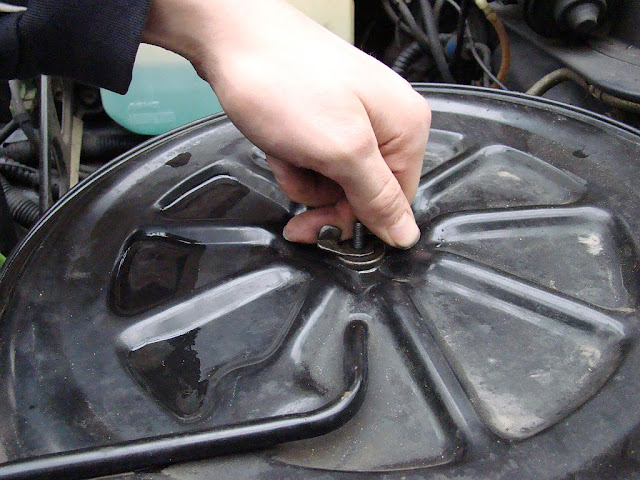 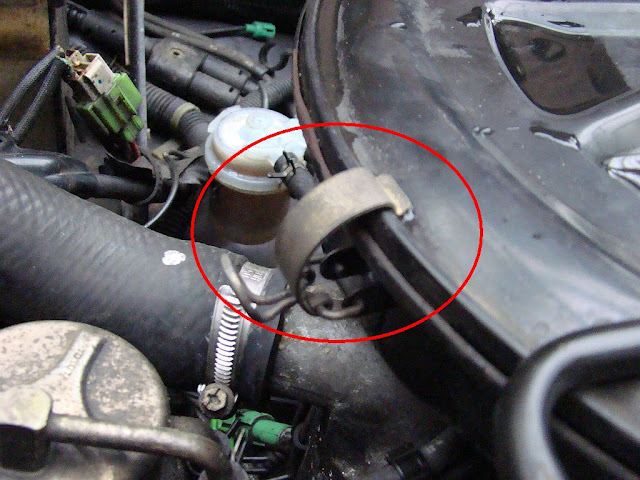 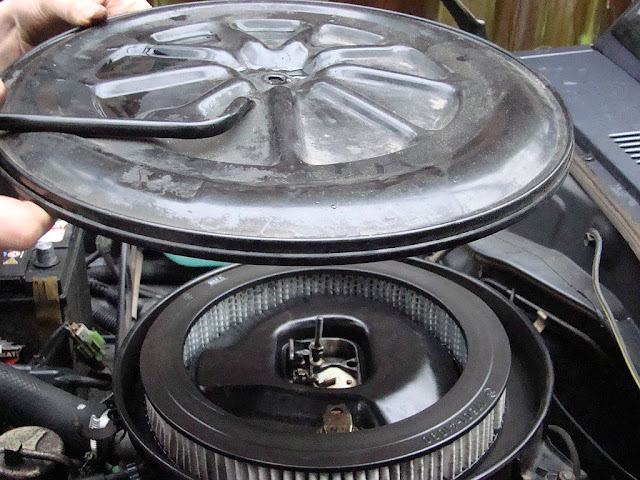 Loosen bolt on right side of the air filter housing. 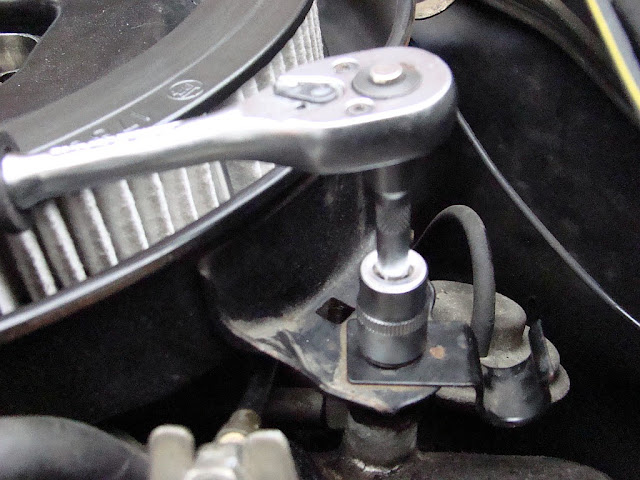 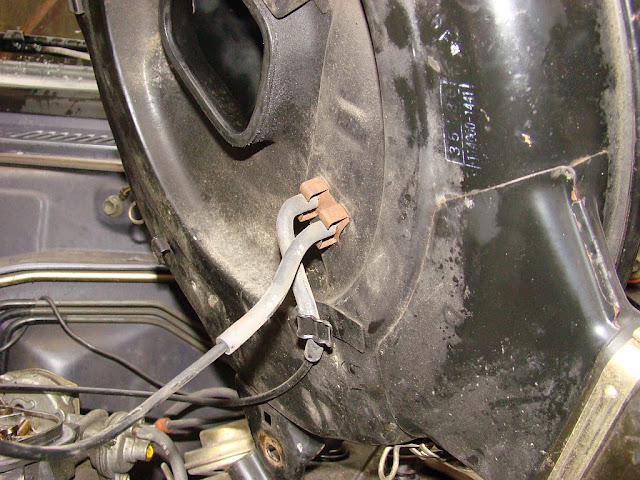 ...and the whole air filter box can be removed. 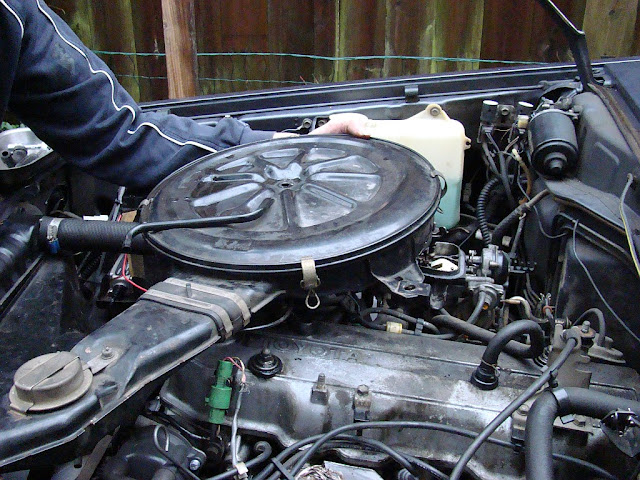 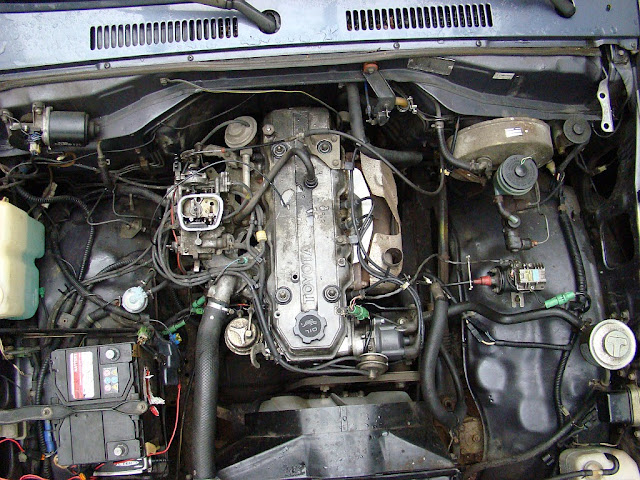